With our latest update you can now create scenario-based training exercises for your K9. A scenario exercise includes several types of patrol training in one focused exercise. The goal is teach the dog to transition back and forth between each skill within a short period of time. This helps you to more accurately replicate real life work as a K9 team. For example, you might switch from an area search to a building search and then to a track in one training scenario.

Creating a scenario exercise is easy. Use the + PATROL TYPE button to add each type to the exercise definition. 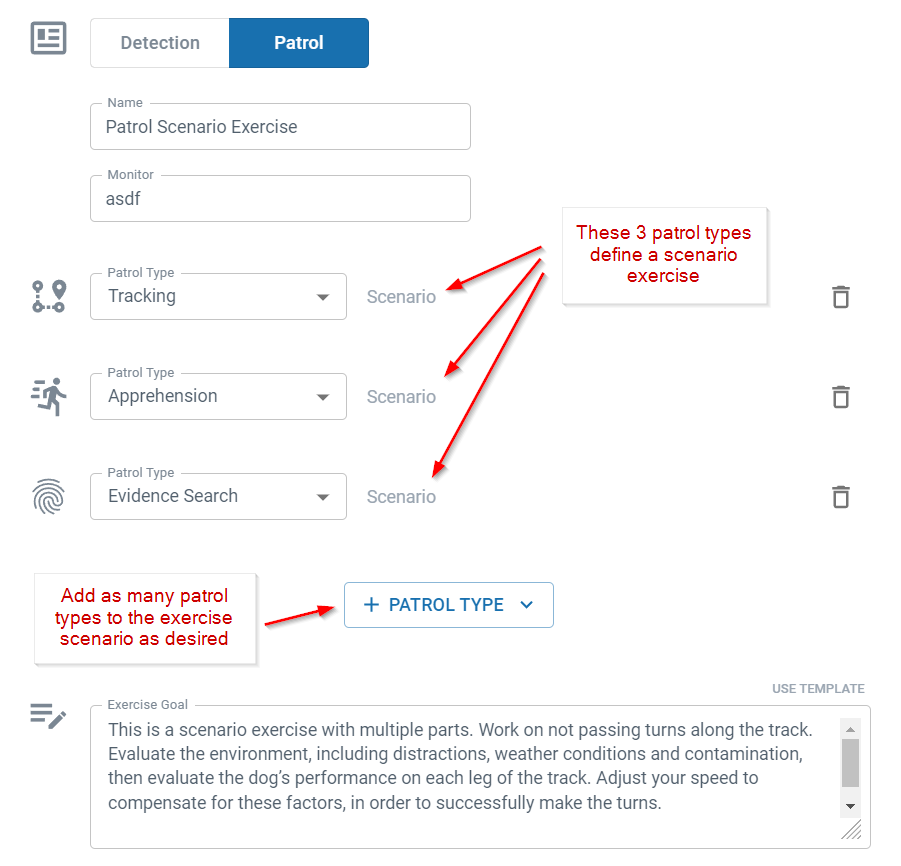 When handlers later complete this multi-part exercise they only need to write their comments on the training outcome in one place to summarize all activities. 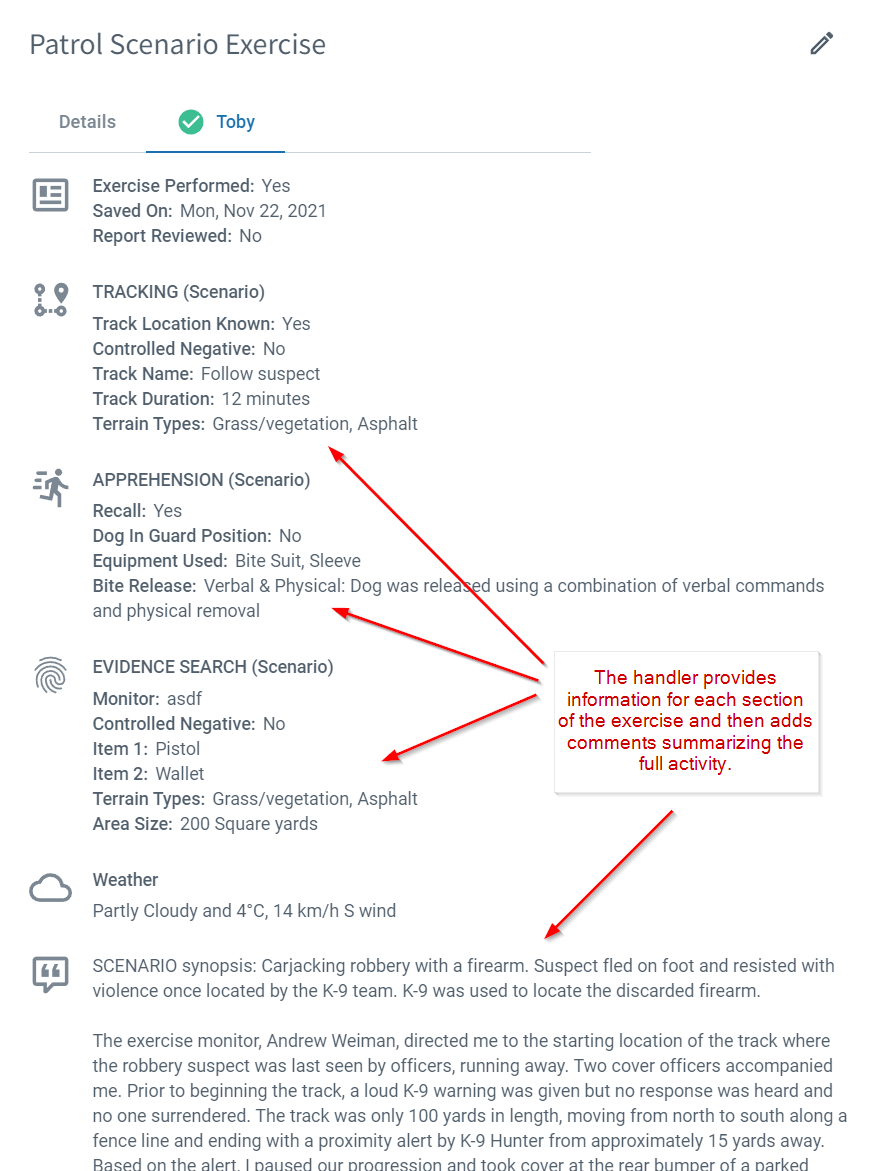 You can also specifically search for multi-type scenario records in the search form. 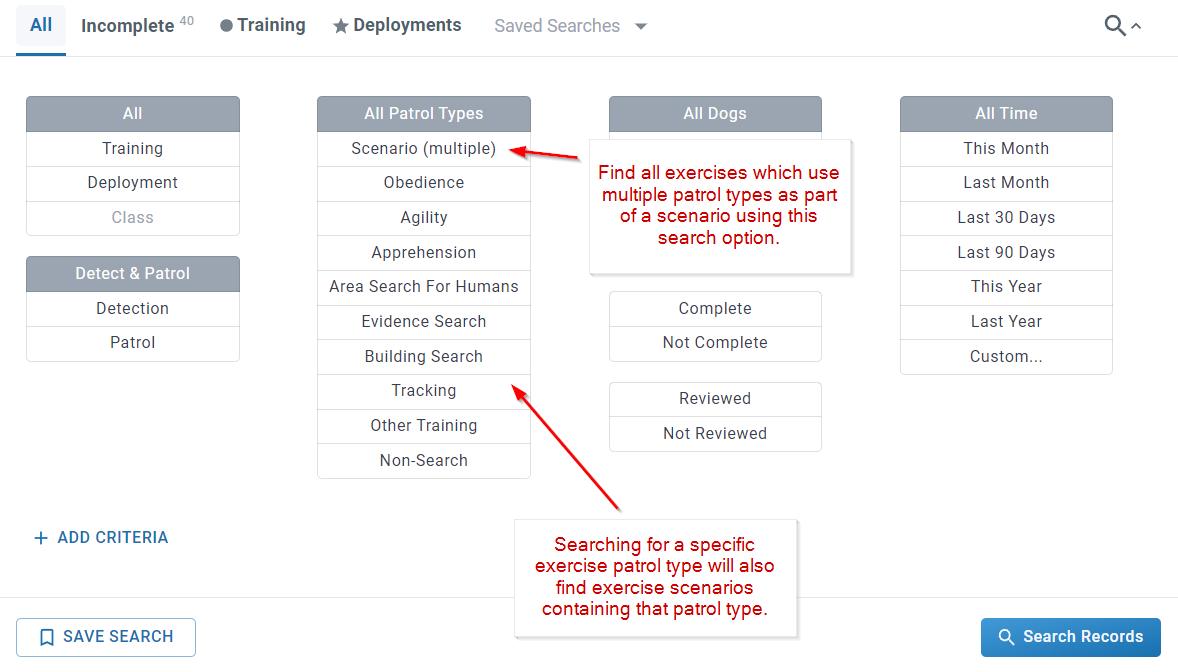 Here’s an example of how you might write up your comments for a scenario exercise.

SCENARIO synopsis: Carjacking robbery with a firearm. Suspect fled on foot and resisted with violence once located by the K-9 team. K-9 was used to locate the discarded firearm.

The exercise monitor, Andrew Weiman, directed me to the starting location of the track where the robbery suspect was last seen by officers, running away. Two cover officers accompanied me. Prior to beginning the track, a loud K-9 warning was given but no response was heard and no one surrendered. The track was only 100 yards in length, moving from north to south along a fence line and ending with a proximity alert by K-9 Hunter from approximately 15 yards away. Based on the alert, I paused our progression and took cover at the rear bumper of a parked work truck and began to survey the immediate area for threats. I allowed K-9 Hunter to move forward to the end of his 20 ft tracking lead to cast for airborne odors. K-9 Hunter again began to bracket with his head up, cast along the soft air currents that were flowing into his direction from in front of us. K-9 Hunter targeted a garbage container and barked as an alert to the presence of the hiding suspect. Another K-9 warning was given to the unseen and still hidden suspect. The suspect ran from his hiding place at the opposite side of the garbage container and K-9 Hunter was released with the apprehension command. There were no issues with the dog’s tracking.

K-9 Hunter chased the suspect down and bit the hidden sleeve on the decoy’s right arm, holding on until I ran up to aid in the apprehension. I ordered the suspect to stop resisting and to stop kicking the dog as I performed two knee strikes and a leg sweep on the left leg of the suspect to take him to the ground. I ordered my cover officers to take control of the suspect’s legs and left arm as I took control of K-9 Hunter. K-9 Hunter was given one verbal command to release the bite as I applied e-collar stimulus simultaneously to the voice command. K-9 Hunter responded instantly and affirmatively to the verbal and physical command to release.

Once we moved back to the starting location of the track, I was informed by the monitor, Andrew Weiman, to walk across the street and meet with monitor Aaron Petermen. I was informed that the suspect had discarded a pistol and a wallet and I was to perform an area search for the evidence. I removed the tracking harness and long lead from K-9 Hunter, and gave him the command to search the open grassy area for evidence. K-9 Hunter was able to locate and move into a down position in front of the pistol in approximately 40 seconds. I called K-9 Hunter to a heel position and Monitor Aaron Peterman covered the pistol with a traffic cone. I commanded the K-9 to search the area again and he was able to locate the wallet in about 2 minutes of searching and about 20 yards from the pistol. K-9 Hunter moved to a down position with the wallet in front of him and he mouthed the wallet, throwing it up into the air, at which time I verbally corrected him and commanded him back into the down position at the wallet. The K-9 was called to a heel position and redirected to search again, to reinforce the down command on the article and to not molest the evidence. I verbally corrected the dog when he got too close to the article with his mouth and he avoided touching it. I called him to the heel position and leashed him. As we walked away, in a heel, I rewarded the dog with a toy and game of tug.

We hope you find this new feature addition helpful. If you have any feedback on this update or anything else then please reach out and let us know.