Welcome to another PACKTRACK release. It’s a big one! This update includes significant refinements to the way PACKTRACK works and new interface changes aimed at making the service easier to use.

We’re in the process of updating the PACKTRACK interface, step by step, to improve the experience for everyone. In this release we’ve introduced a modernized Dogs page with more features and a layout that adapts across all devices – from phones to desktop computers. Dogs are now listed on summary “cards” which provide a clear overview of their configuration and a summary of their training and deployment activity. The card view is interactive and has options for changing the dog image, viewing documents or editing dog details. The menu button (3 horizontal dots) in the upper right of each dog card shows a drop-down menu with additional options. 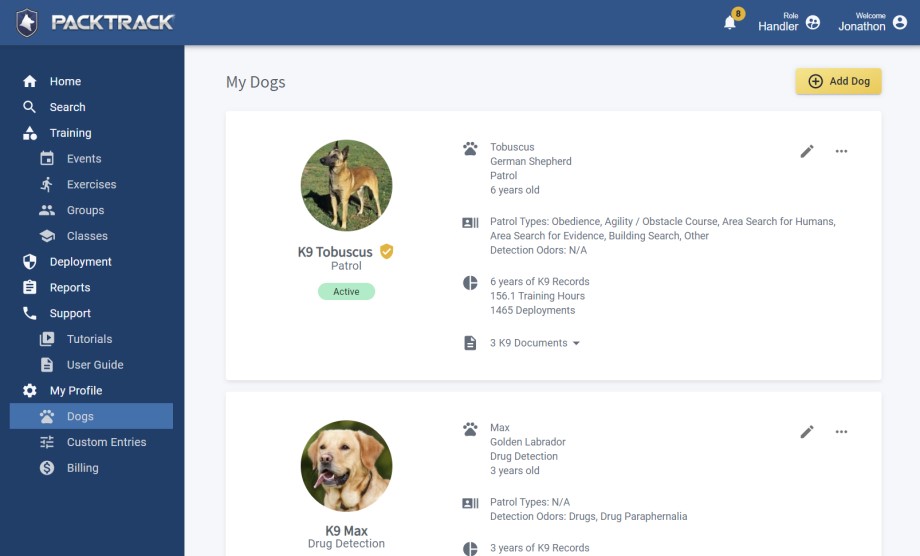 Choosing to Add or Edit a dog shows a panel on the right side of the page. There are 3 options in the upper left of this panel for managing your dog’s information: Edit Details, Edit Photo and Manage Documents. Feel free to explore some of the new functionality. For example, the Edit Details option shows new dog configuration fields including settings for your dog’s Patrol Types and Detection Odor Types. Information on how these new dog type settings are used is covered in the sections below.

The Edit Photo screen now supports drag and drop and provides additional image editing options like zoom and rotation. Managing documents for your dogs is easier than ever. In addition to supporting drag and drop to upload new files, you can now rename your files and organize them into categories. If you have questions about how these new screens work then check out the instructions shown in the bottom left. 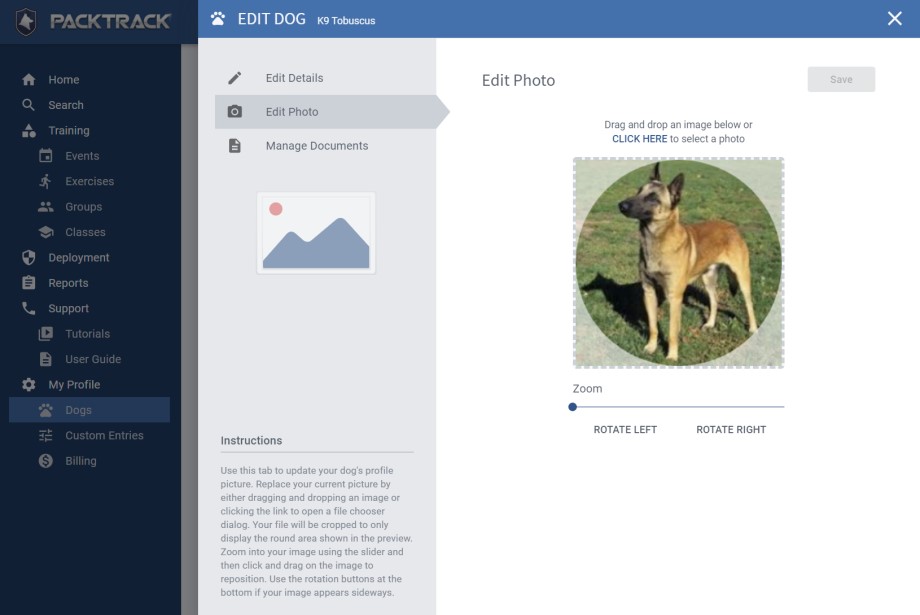 Ignore Exercises That Aren’t Applicable To Your K9

When training at a group event, there may be exercises that don’t apply to your dog. For example, the event might include a detection exercise but you have a patrol dog. Or perhaps there’s a patrol tracking exercise but your patrol dog doesn’t track. In the past, you would need to complete all exercises at an event for each of your dogs in PACKTRACK. For each exercise that doesn’t apply to a specific dog you would select the option “Did Not Perform – Not Applicable to Dog”. With this release we’re introducing K9 type attributes. These new settings allow you to specify the types of exercises that apply to your dog. All other exercise types will be automatically ignored. 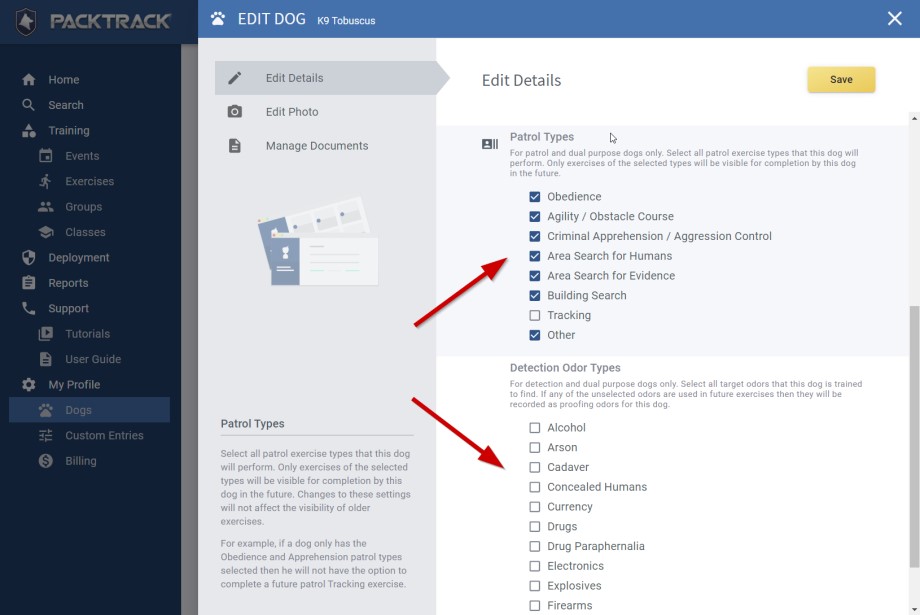 When you first log in after this update you’ll be asked to review your dog configuration. From the new Dogs page, click the Edit icon for each of your dogs to open the editor interface. Choose the Edit Details option and scroll down in the right pane to select any Patrol Types and Detection Odor Types that apply. Only exercises of the types that you select will be visible for completion by this dog in the future. However, changes to these settings will not affect the applicability of past exercises.

These changes affect patrol and detection dogs. For example, if a patrol dog only has the Obedience and Apprehension patrol types selected then they will not have the option to complete a future patrol Tracking exercise or any detection exercises. This applies to exercise target odors for detection dogs as well. For example, if a detection dog only has the Drugs odor type selected then they will not have to complete exercises at future events which only contain Explosive type target odors. They also won’t have to complete any patrol exercises. If you want your dog to complete all exercise types at every event then feel free to select all of the patrol and detection odor types for each of your dogs. 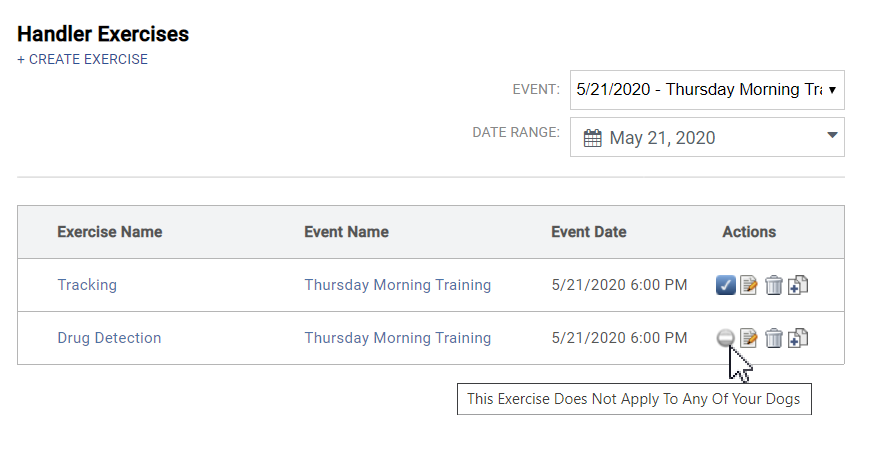 When creating a detection exercise, PACKTRACK enables you to specify target odors (drugs, currency, explosives, etc.) as well as any proofing odors (typically packaging or distractor odors such as cardboard, plastic wrap, paper, etc.) that may be used. Your dog should alert to the target odors and ignore the proofing odors. This works great if all of the dogs at an event are of the same detection odor type.

However, if different detection dog types, such as a drug dog and a currency dog, are in an exercise that uses both drug and currency odors then things get more complicated. In this case, we want the drug dog to use drugs as the target odor and currency as the proofing odor. The currency dog would use currency as the target odor and drugs as the proofing odor. In the past, adding this type of training required you to create 2 separate exercise records in PACKTRACK – one for each dog. Each exercise would specify different target and proofing odors.

With this release we’ve made the process much simpler. Now you only have to create one exercise no matter how many different detection dogs may attend the event. PACKTRACK will automatically categorize each odor in the exercise as target or proofing based on your dog’s detection odor type configuration.

In the screenshots below, two K9s completed the same drug detection exercise. However, the drug odor was categorized as a target odor for drug dog ‘Max’ (top screenshot) and a proofing odor for currency dog ‘Gore’ (bottom screenshot). 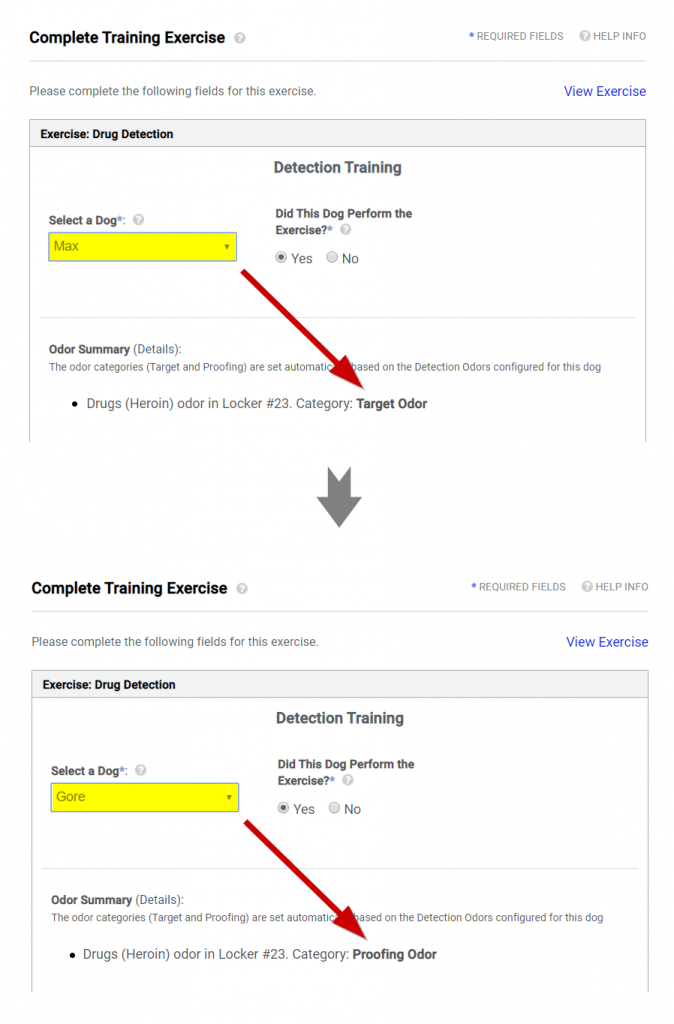 How does this work in practice? For simple exercises nothing should change. Record your target odors in the exercise and you’re set. If you’re running an exercise that only contains proofing odors then make sure to set the Blank / Controlled Negative checkbox when you create the exercise. This ensures that all detection dogs have to complete it.

If the exercise contains both target and proofing odors or there are different types of detection dogs at the event then these changes should make things easier for you. As in the past, when creating the exercise you should explicitly specify the proofing odors which you want all detection dogs to ignore (towels, cardboard, etc.). Next, enter all of the odors that will be target odors for at least some of the dogs. That’s it – PACKTRACK should take care of categorizing the odors as target or proofing for each of your dogs based on their attributes.

Information about how the exercise odors are categorized is displayed when you complete your training record to help you write an accurate narrative (see previous screenshots). The odor category is also shown in your exercise report. The report screenshot below shows that drugs were categorized as a proofing odor for currency dog ‘Gore’. 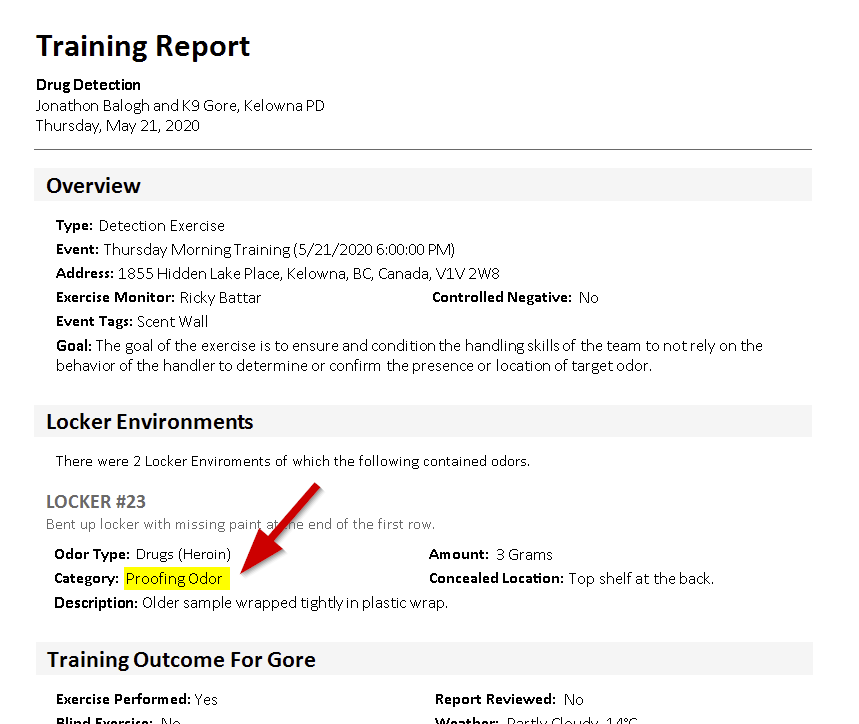 We’re really excited about this update. The new Dogs interface extends the design which started earlier this year with a modernized site layout and interactive handler home page. We’re eager to migrate other areas of PACKTRACK to this new design over the coming months to enable new features and make the system easier to use.

The new dog type settings are aimed at making the system smarter and more automated. With this change we expect there will be fewer occasions where you’ll need to complete a training record by specifying that the exercise didn’t apply to your dog. Meanwhile, automatic odor categorization streamlines how exercises are created for detection dogs. All dogs completing the same exercise will have odors categorized as target or proofing automatically based on their detection odor settings.

Let us know what you think of these changes. We’d love to hear from you.